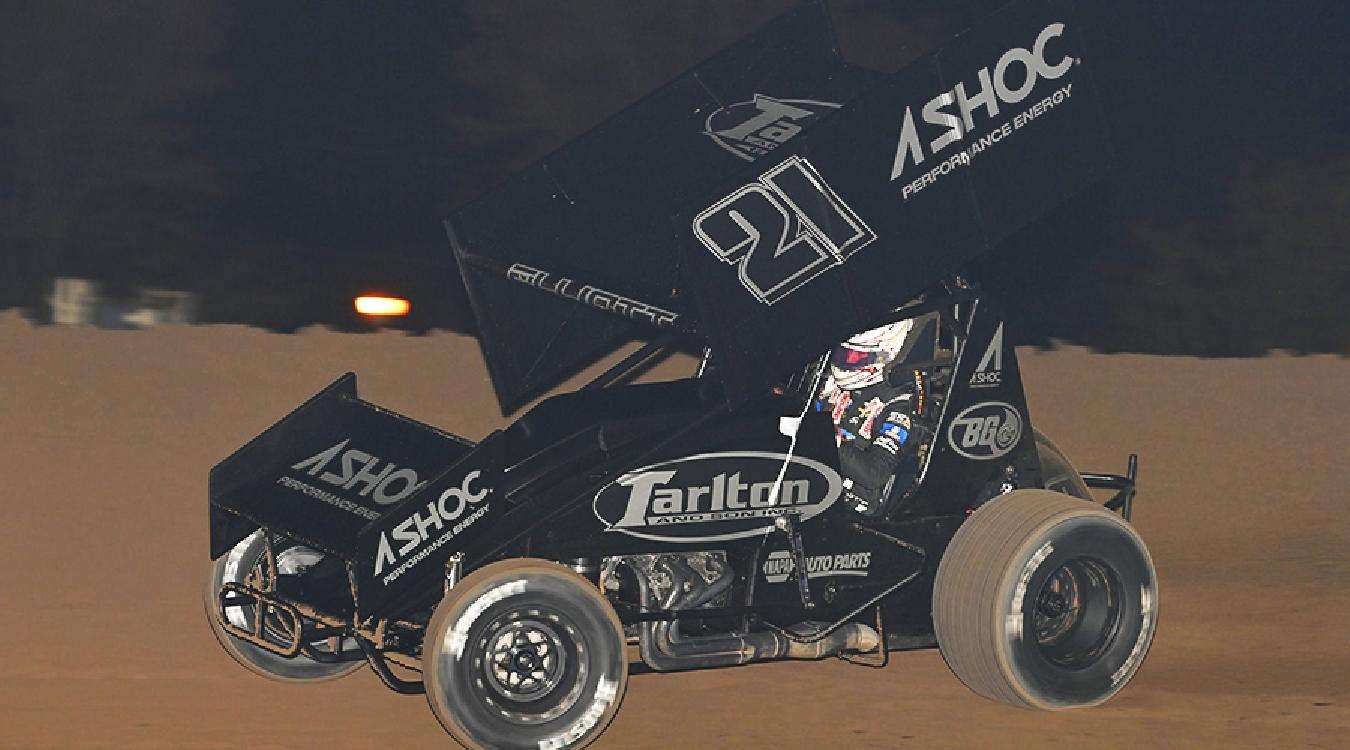 MERCED, Calif. – The Tarlton Motorsports sprint car is one of the more familiar rides on the West Coast, but an unfamiliar face of the California sprint car scene climbed aboard the matte black machine this week.

The 2020 NASCAR Cup Series champion, Chase Elliott, expanded his racing portfolio by making his sprint car debut in the Tarlton No. 21 at Merced Speedway for two nights of winged 360 racing.

His Hendrick Motorsports teammate, Kyle Larson, is rubbing off on him more and more.

Larson rarely misses an opportunity to race on dirt, and not only did Elliott wheel a sprint car, but he midget both nights alongside Larson.

“Obviously jumping back and forth between the two cars is challenging, especially when you don’t know what you’re doing,” Elliott said Wednesday afternoon with a smile.

Elliott got a solid start to night one in the sprint car, timing 16th quick of 29 cars. The Georgia native started third and finished third in his heat race, lining him up 14th for the 35-lap feature.

In the main event, he fought to keep up with the changing conditions, ultimately slipping to 18th in the final rundown.

“I felt like I went backwards,” Elliott said of Tuesday night. “I feel like I started the night OK and got worse as the track changed and slicked off, so I’m trying to put it all together.”

Evolving track conditions and other nuances of the dirt world have presented a variety of obstacles for Elliott as he continues to get acclimated.

“I try to pick up on a few things here and there,” Elliott said of his learning curve. “I’m certainly still confused in a lot of areas. This style of racing is just so removed from everything I’ve ever done.”

Another adjustment for Elliott has been the quick pace of dirt events, which was magnified competing in both divisions at Merced.

While challenging, the 25-year-old appreciates the distinction from the asphalt world, especially the importance of capitalizing on every fleeting chance throughout the night.

“I think a lot of it really is the quickness of the heats, how fast the show goes, which I love,” Elliott said of notable differences. “I love that about dirt racing. I think that might be the single best thing that they have going at these tracks across the country as opposed to asphalt racing is just the amount of time you’re here. It’s very efficient, which I think is fantastic.

“Also with that comes a sense of urgency with your qualifying, and your heat races are really quick,” Elliott added. “Features are quick, so everything just goes by really fast, and you really have to take advantage of opportunities, or [you] get taken advantage of, is really kind of how it goes.

“For me it’s just getting comfortable, growing that sense of comfort to be aggressive and make those moves, and I’m just not there yet,” Elliott continued. “I think that just comes with time.”

On Wednesday night Elliott applied some of his early lessons, leading to an improved second sprint car outing.

Elliott timed fourth quickest, then fell back in his heat which started him 16th in the feature.

A late charge in the A main saw Elliott miss the top 10 by only one spot with an 11-place finish.

The midget will once again be Elliot’s focus this weekend as he follows the USAC NOS Energy Drink National Midget series to California’s Ventura Raceway for the season-concluding Turkey Night Grand Prix.

Elliott is willing to make more sprint car starts as he embraces the new challenge of dirt racing.

“I really have had a lot of fun with it,” Elliott said. “I appreciate the fans, Tommy (Tarlton), Paul (Baines), Kyle (Larson) and everybody for letting me come do this… I’ve enjoyed it. I want to get better and want to learn, and that’s why I’m here.”